The History of United Nations Peacekeeping Operations from 2000–2020

COURSE AUTHOR: Paul D. Williams, Ph.D., is currently Professor at the Elliott School of International Affairs, the George Washington University, where he is also the Associate Director of the Security Policy Studies M.A. programme. Professor Williams received his Ph.D. in international politics from the University of Wales, Aberystwyth (2001). He worked previously at the universities of Warwick and Birmingham in the UK and has been a Visiting Scholar at Georgetown University and the University of Queensland (2008) and a Visiting Professor at Addis Ababa University, Ethiopia. In 2014–2015, he was a Fellow with the Woodrow Wilson Center for International Scholars, and between 2012 and 2019, he served as a Non-resident Senior Adviser at the International Peace Institute in New York. Professor Williams is the author of several books related to peace operations, including Understanding Peacekeeping (Polity Press, 3rd edition, 2021); Fighting for Peace in Somalia: A history and analysis of the African Union Mission, 2007–2017 (Oxford University Press, 2018); War and Conflict in Africa (Polity Press, 2nd edition, 2016); and is the Co-Editor and Contributor to The Oxford Handbook of United Nations Peacekeeping Operations (Oxford University Press, 2015). 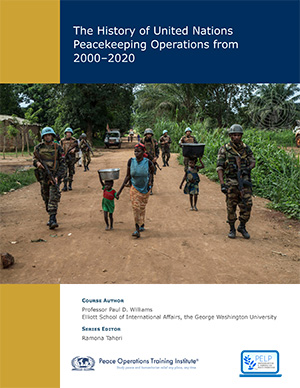 "This is a good course to know the history and worked in UN."

"The course helps in linking with other history courses taken before."

"It is a very comprehensive course. The last 20 years that were missing as part of the remarkable History of Peacekeeping Operations. The author has created such a great combination of facts and academic research data throughout the entire course. Very well organized and presented."

"A comprehensive and updated package"