New! Peacebuilding has emerged over the last two decades as one of the most enduring concepts of the United Nations System. The concept of peacebuilding initially aimed to help nations recover from violent conflict, but in recent years it has come to include conflict prevention in weak and fragile States. After the end of the Cold War, the UN and other regionally sponsored peacekeeping missions created programmes to help troubled nations become effective members of the international community. The idea to help States recover from war or violent conflict merged into the field of peacebuilding. UN involvement in peacebuilding has expanded since the groundbreaking 1992 publication of An Agenda for Peace and the creation of the Peacebuilding Commission in 2005. An Agenda for Peace addressed the concept of post-conflict peacebuilding, and since that time, the concept of peacebuilding has undergone extensive study by practitioners, scholars, and policymakers. Other international organizations have also developed programmes to enhance peacebuilding in failed and fragile States.

COURSE AUTHOR: Dr. George F. Oliver served 31 years in the United States Army before turning to a career in academia. He has taught, written, and lectured around the world on the role of the military in peace operations and peacebuilding. While on active duty in the US Army, Dr. Oliver served in a variety of light infantry, ranger, Special Forces, and airborne units across the globe. His assignments included Deputy Coordinator for Humanitarian Assistance for the Coalition Provisional Authority in Iraq, Director of the US Army Peacekeeping and Stability Operations Institute in Carlisle, Pennsylvania, and the Military Advisor to the US Ambassador to the United Nations. Dr. Oliver received his Ph.D. from the George Mason University School of Conflict Analysis and Resolution and joined the faculty of the US Naval War College in Newport, Rhode Island, in November 2005 as a Professor of Joint Military Operations. 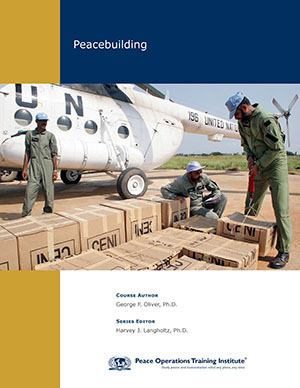 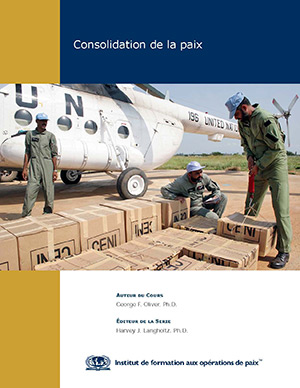 Sample pictures from the course:

Read what other students have said about the course after completing it...